No- Bake Protein Bar Base Recipe 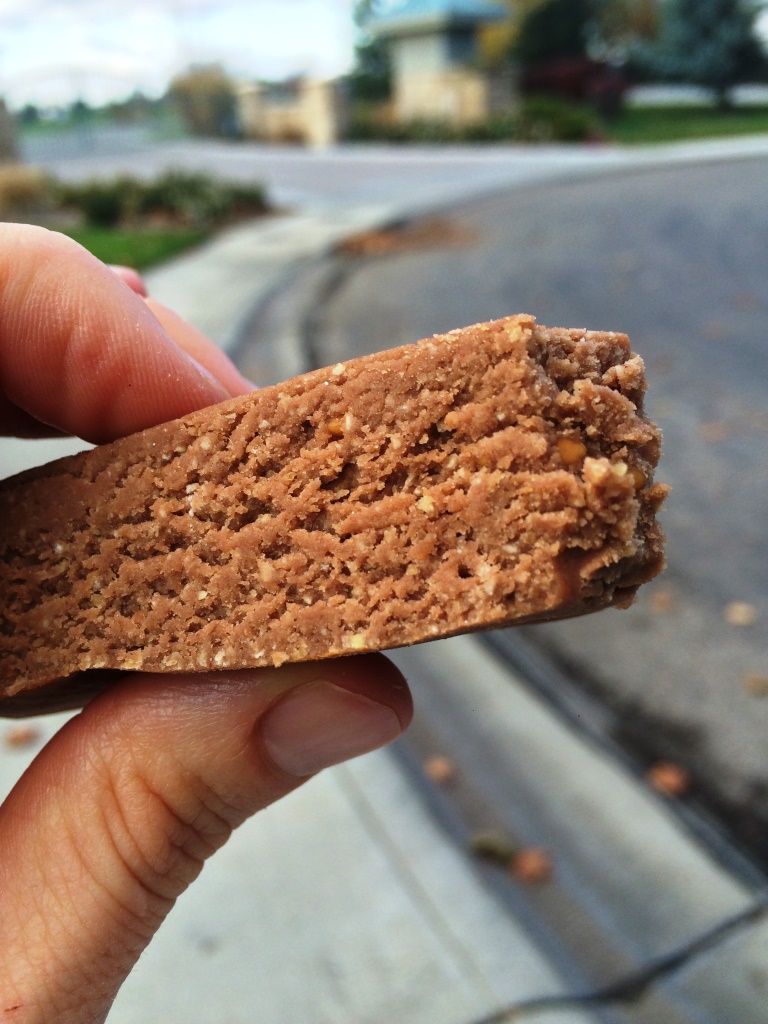 My nutrition client LJ posted this recipe from the Power Hungry blog on our Team Facebook page and I loved the simplicity of it.  With 5 ingredients (all of which you can pronounce) these bars go together in a snap.

I whipped-up a quick batch and these protein bars have been a savior for me the last few days since I have been crazy busy and have been eating on the run a lot.  An added bonus is the fact that these are really filling.

The only modification I made to the recipe was to use 1 cup of almond milk versus the 1 1/3 cups the recipe called for.  Years ago I learned to always add less liquid initially to a recipe than it calls for because you can always add more if necessary and you can’t UNadd liquid once you have too much. 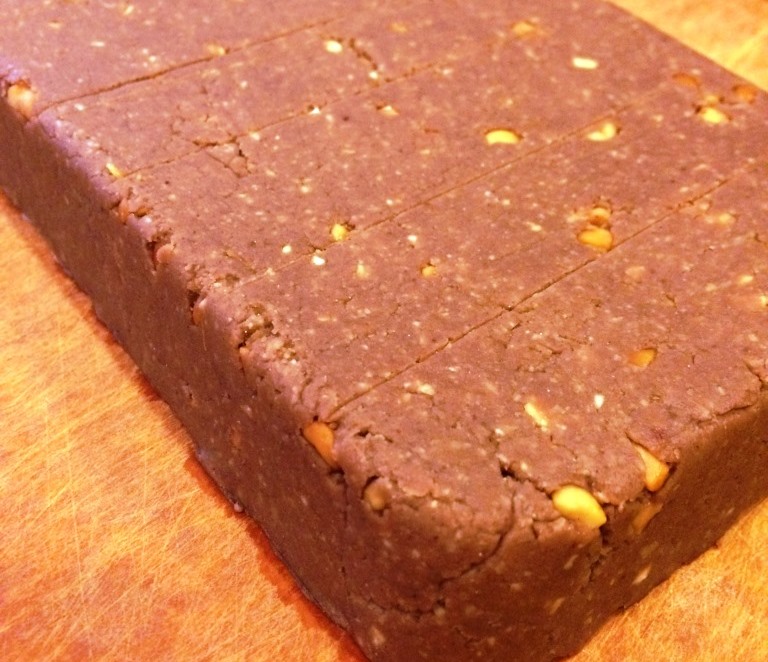 The add-ins you could include in these bars are endless:

Here are the nutrition facts for the bars as I made them (It made 8 bars): 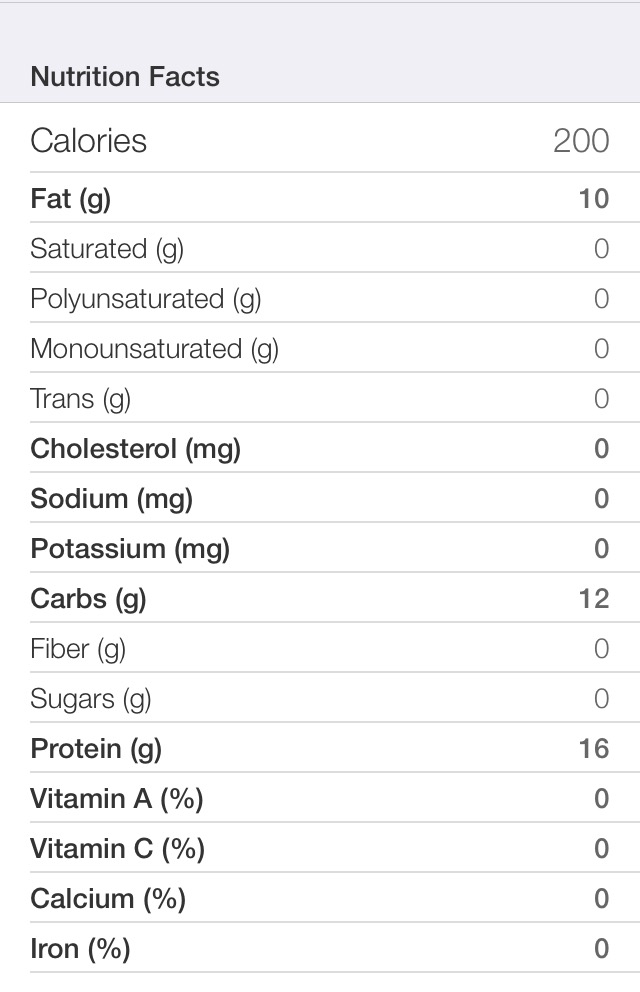 P.S.  If you are interested in giving Crazy Richards a try use the coupon code FITQUESTMOM for 10% off. I originally blogged about this Skinny Bitch chili recipe HERE and thought I would re-post the recipe since it is an awesome FAST and EASY one to make for the Super Bowl.

This chili tastes great over polenta, brown rice, with a side of cornbread or on its own.

In a large saucepan, heat the oil over medium heat and sauté the onions until soft, about 5 minutes (I water sautéed mine). Stir in the chilis, taco seasoning, tomatoes, kidney beans, and black beans. Let the mixture simmer for about 15 to 20 minutes (after water sautéing the onions I threw all of the ingredients in the slow cooker around lunchtime and kept it on low until dinner).

Mediterranean Snack Foods recently sent me some of their Baked Lentil Chips to try.  After sampling the three varieties they sent, I sat down at my computer to type my review and brought along the Sea Salt variety and some hummus to snack on as I type (that’s a good sign).

While the sodium content is higher than I’d like, it pails in comparison to many of the “healthy” snack cracker/chips on the market today.  Since the chips are made primarily from a bean flour mix (lentils, garbanzo, and adzuki beans),  I expected the chips to be dense, however the more closely resemble a popped chip vs. what we have come to know a baked chip to be.  They are light and airy, yet they stand-up to dips very well without breaking.

I liked all 3 flavors, but if pressed I would have to say that I rank them in this order:

Seeing as I literally ate the whole bag (I considered it lunch), I would say that they have underestimated the serving size since a bag is supposed to contain 4.5 servings.

For those of you interested in the nutrition information:

Mediterranean Snack Foods does offer other flavors of Lentil Chips, however they contain dairy…so be sure to read the labels.

Have any of you tried these yet?  What did you think? I am so excited to offer this wonderful giveaway courtesy of Green Kid Crafts (Click HERE for my product review).  Green Kid Crafts will be giving away 1 PLANET-FRIENDLY CRAFT BOX to one lucky winner.

Founded in 2010, green kid crafts is the original craft subscription company.  With Green Kid Crafts, parents and kids can enjoy planet-friendly (they offset 100% of the CO2 they generate), monthly projects that spark creativity and cultivate respect and love for the environment.  All materials are included in the package, making it one-stop shopping for child engagement.

Monthly memberships are available for $19.95.  Gift subscriptions are also available for three, six, or twelve months.  Check them out at http://www.greenkidcrafts.com .

This giveaway is limited to residents of the United States.  The giveaway will run through midnight PST, Tuesday AUGUST 19th.

The winner will be announced Wednesday August 20, 2012

NUTRITION STUDIES – QUESTIONS YOU SHOULD ASK I recently received the results of a nutrition study re: raisins and post-meal glucose levels.  This got me thinking…I have learned to be some what savvy when sifting through this type of information, however I can see how it would be very difficult for most people who don’t do this on a daily basis; especially when news outlets pick-up these stories and soon you hear news anchors everywhere extolling the virtues of this or that.

While I have not done the further research yet, when examining study findings such as the ones below, questions pop-up in my head and I thought it might be helpful for you to see how I personally go through articles such as the one below (My comments will be in RED).  I definitely do not claim to be an expert in deciphering research…these are the methods I follow personally.

For this particular study, I noticed immediately that though it came from a Nutrition Website I subscribe to and thoroughly enjoy (Smartbrief for Nutritionists), it had a disclosure on the top of the e-mail stating, “This is a paid advertisement” which got me thinking…who paid for it?

The study was conducted at the Louisville Metabolic and Atherosclerosis Center (L-MARC) by lead researcher, Harold Bays, MD, medical director and president of L-MARC (Does this doctor have any affiliation with the Raisin Board?).

The study was conducted among 46 men and women who had not previously been diagnosed with diabetes mellitus, but who had mild elevations in glucose levels. Participants were randomly assigned to snack on raisins or pre-packaged commercial snacks (Again, what specifically were those snacks?) that did not contain raisins or other fruits or vegetables (We now know the other snacks were not produce-related), three times a day for 12 weeks (How big was the portion size?). Findings included:

“Raisins have a relatively low glycemic index and contain fiber and antioxidants, all factors which contribute to blood sugar control,” said James Painter, Ph.D., R.D., and nutrition research advisor for the California Raisin Marketing Board. “Decreasing blood sugar and maintaining normal hemoglobin A1c levels is important because it can prevent long-term damage to the heart and circulatory system.” This statement is reasonable, however dried fruits are MUCH higher in sugar and MUCH more concentrated in calories than fresh fruit.  My fear would be that people begin ADDING handfuls of raisins into their diets in an attempt to lower their blood sugar and that seems misguided.

The research is from a two-part study by L-MARC that looked at raisins and possible impacts to blood pressure and blood sugar levels. The first part of the study announced at the American College of Cardiology’s 61st Annual Scientific Session suggests eating raisins three times a day may significantly lower blood pressure among individuals with slightly higher than normal blood pressure, otherwise known as prehypertension.

Again, I DO NOT have the answers to all of the red flags above…that will take further research; I merely wanted to share the process I go through  with you.

Do any of you have a similar process you go through in your head when reading nutrition information or listening to news stories about nutrition / health? Last year I was introduced to Temecula tangerines.  I had seen them in Mother’s Market before and never even thought about buying them because quite frankly they aren’t very enticing.  I know, don’t judge a book (or in this case fruit) by its cover, but these oranges look like they would be dry and not juicy in the least.

Last year the kids and I went shopping and Mother’s was sampling the Temecula tangerines.  Man, they are good!  Juicy, flavorful, and uber-convenient. Temeculas peel so easily and can quickly be peeled into a bowl of sorts, which is our favorite way of eating them.  We peel off the top of the tangerine and are left with a wonderfully tasty “bowl” of tangerine segments which easily pull-out segment by segment.

Have you tried Temecula tangerines yet??? It is getting hot here!  My brain is constantly thinking about what I can make as a nice cooling treat.  With all of the cute fruit and melon wands I have been seeing on Pinterest, I decided to take it one step further by freezing them while simultaneously simplifying the fruit wands by sticking with just one fruit and one cookie cutter cut per Popsicle. I cut off all of the rind of the watermelon while keeping the watermelon in tact and then made 1/2-3/4″ thick big round slices (We used a mini-melon, but next time I plan on using a standard watermelon).  The kids and I then cut out shapes in the watermelon using cookie cutters, stuck small wooden dowels in them, placed them on cookie sheets and froze them…Instant whole-food Watermelon Popsicles.

Yum!  Perfect for the Fourth. We have a winner!  The winner of the 6 month membership to Spork Online is…

ashcoop – I sent you an e-mail detailing how to collect your prize.  If you have any questions, please e-mail me gretchen (at) veggiegrettie (dot) com

Michelle Pfeiffer has recently made the switch to a vegan diet…watch to find out why. Hurray for Disney…they have done it again!

Many of you may remember that as a family we went on a Disney cruise and I raved about how accomodating they were to my family’s food requirements (if you missed the post click HERE).  Disney is further impressing me by becoming the first major media company to ban ads for junk food on their network, though the new standards won’t be fully adopted until 2015. “Under Disney’s new standards, all food and beverage products advertised, sponsored, or promoted on Disney Channel, Disney XD, Disney Junior, Radio Disney, and Disney-owned online destinations oriented to families with younger children will be required by 2015 to meet Disney’s nutrition guidelines.   The nutrition guidelines are aligned to federal standards, promote fruit and vegetable consumption and call for limiting calories and reducing saturated fat, sodium, and sugar.

The emotional connection kids have to our characters and stories gives us a unique opportunity to continue to inspire and encourage them to lead healthier lives.”

“This new initiative is truly a game changer for the health of our children,” said First Lady Michelle Obama. “This is a major American company – a global brand – that is literally changing the way it does business so that our kids can lead healthier lives.  With this new initiative, Disney is doing what no major media company has ever done before in the U.S. – and what I hope every company will do going forward.  When it comes to the ads they show and the food they sell, they are asking themselves one simple question: “Is this good for our kids?”‘ Disney is also partnering with “healthier” companies to promote their products as can be seen in their latest partnership with Subway.  I for one am SUPER PSYCHED to take my daughter to go see the movie Brave and am thrilled to see that the main character is promoting a Subway sandwich meal with fruit (not chips) vs. burgers and fries (though I wished the sandwich was a veggie sandwich!).  Progress, right?  I am beyond excited to see that we are moving in the right direction and rather than poo pooing the fact that Disney considers dairy and meat to be part of a  healthy diet, I choose to take joy in the fact that we are getting there.

“Making healthy eating and physical activity fun is central to creating healthier generations to come,” said Dr. James O. Hill, who worked with Disney to develop its nutrition guidelines, and is executive director of the Anschutz Health & Wellness Center at the University of Colorado.  “Disney is using ‘magic’ – fun and creativity – to encourage kids and families to make positive changes, and it is working.”