It is that time again…time for me to go pumpkin crazy.  Let’s see, so far this week I have had a Pumpkin Pie Smoothie (someday I’ll get around to writing down my recipe), pumpkin tamales (Thank you Mother’s Market!!!), and I ate my fair share of pumpkin while developing the recipe that follows…one that is sure to become a favorite for me.

I bought 10 cans of organic pumpkin at Trader Joe’s last week (no joke) and set to work in the kitchen to work on an idea I had while trying to fall asleep the night before.  Apparently that is what I do.  While other people have sugarplums dancing in their head, I have pureed pumpkin.

My first dessert hummus (Peanut Butter Chocolate Chip) was such a hit with my kiddos that I wanted to come-up with another dessert hummus which would satisfy their sweet tooth and pump them with lots of fiber and protein.  This new dessert hummus recipe is even healthier than my first since it is nut-butter free and thus low-fat.

I hope you enjoy this recipe as much as I do…I have been known to eat it by the spoonful.

Rest assured, there is sure to be lots of pumpkin on Veggie Grettie reader’s future. 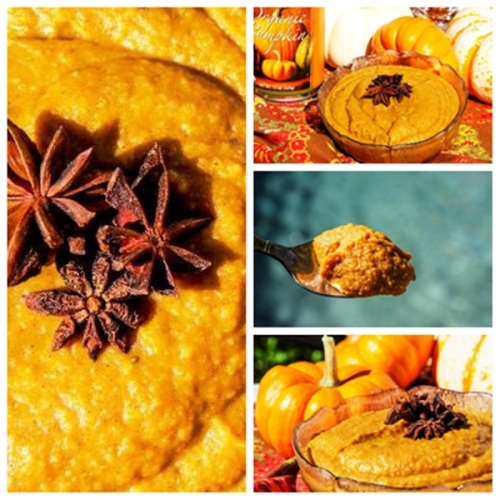 Place all of the ingredients into the food processor (a high-speed blender will probably work, but I haven’t tried it) and pulse a few times to incorporate.  Process for 1-2 minutes and stop to scrape down the sides.

Store in the refrigerator.