My Brush with Rhabdo 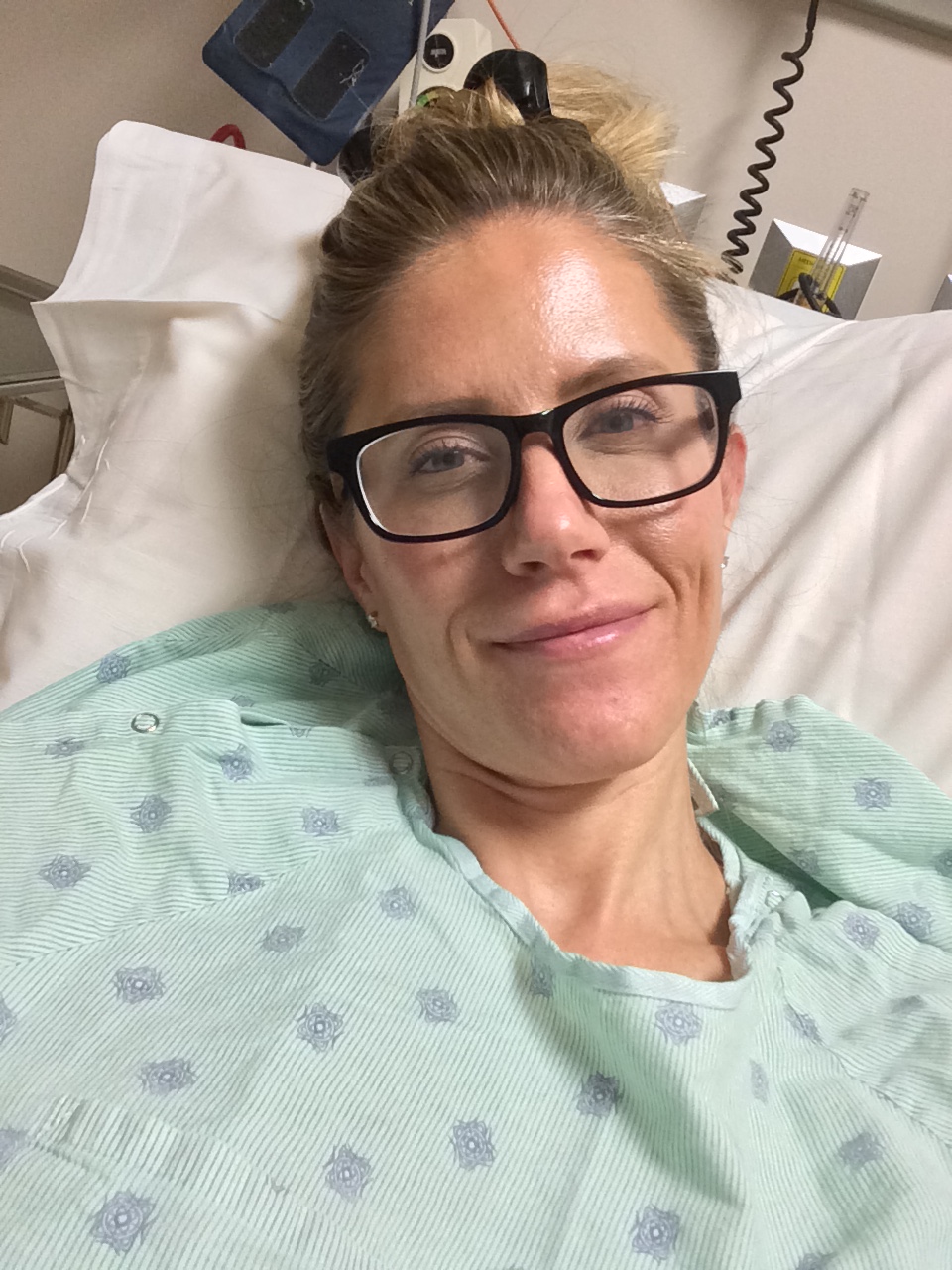 I am guessing that a few of you may have noticed the absence of my Reverse Dieting update on Monday.  Let’s just say this has been a very interesting week.

Let me just pull the band aid off and tell you that I ended-up being admitted to the hospital Last Sunday night with Rhabdomyolysis (aka Rhabdo) and was in there through Wednesday.

For those of you unfamiliar with this condition (I had NEVER heard of it), Web MD explains it as:

Rhabdomyolysis is a serious syndrome due to a direct or indirect muscle injury. It results from the death of muscle fibers and release of their contents into the bloodstream. This can lead to complications such as renal (kidney) failure. This occurs when the kidneys cannot remove waste and concentrated urine. In rare cases, rhabdomyolysis can even cause death. However, prompt treatment often brings a good outcome.

There are many causes of rhabdomyolysis. The most common causes include:

The following are common signs and symptoms of rhabdomyolysis (Web MD):

In talking to the nurses and doctors they see this most often in Cross-fitters (though from what I have read Crossfit is working hard to educate their trainers about how to avoid this and how to recognize the symptoms), endurance athletes, and football players who go from having the summer off to 2-a-days in the HOT summer sun.

It seems that a perfect storm came together and resulted in my getting this condition.  At the beginning of the month I had a colonoscopy and (TMI…sorry), the prep didn’t work for me as effectively as it should, so the instructions said to DOUBLE the amount of Miralax I was supposed to take.  Even after doing that I still hadn’t had a BM, so I talked to the doctor on call and was told to take 2 more Dulcolax.  That finally got things moving, but that meant that all told I ended up taking 575g of Miralax (that’s over a pound of Miralax) and 4 Dulcolax.  My colonoscopy was 11/4 (on a Wednesday) and I never quite recovered my stamina after that.  I didn’t workout the day of my colonoscopy and gave myself 2 more days afterward away from the gym to recover, but like I said, I was still exhausted.  Later I did a search of Miralax and Rhabdo and found some interesting links / studies.

As I mentioned to all of you in my last update, I began a new workout program the following Monday 11/9.  On Wednesday part of the workout called for 4 x 15 chin-up negatives.  They were REALLY hard for me, but I pushed through and did all 60 reps.  I was SUPER sore the next day and thought, “Man, I am going to get so strong if I am this sore.”  I was so sore the next day and my arms had difficulty straightening.  I was walking around like a T-Rex.  I posted the picture below to Instagram a few days later: 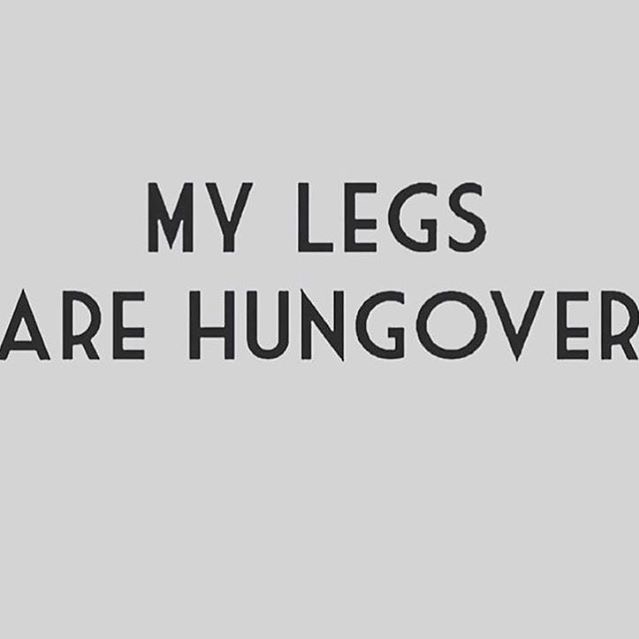 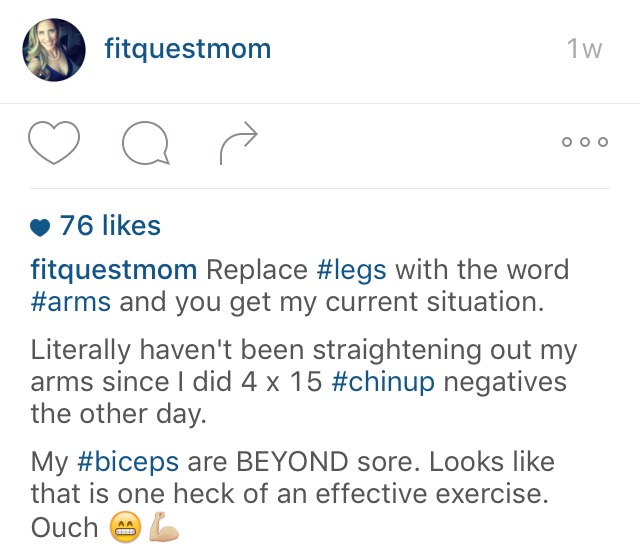 I was feeling a bit better by Saturday so I went ahead and STUPIDLY did another arm workout that involved 4 x 15 parallel chin-up negatives (later I will discuss the danger of eccentric exercises if you are not used to doing them).  I felt ok until I started doing them and then during it I was in pain, but thought I’d push through because in the past if I would do a workout where I would get sore, the soreness would subside, and when I worked out that body part again a few days later it actually helped.  This time this was not the case.  The T Rex arms came back with a vengeance and more stiff than ever.

By Sunday my arms were starting to feel swollen, I was gaining weight (despite following my macros), and felt VERY bloated.  Without thinking much about it I posted a picture of my swelling to Instagram (normally my arms taper in a good amount where my bicep meets my forearm). 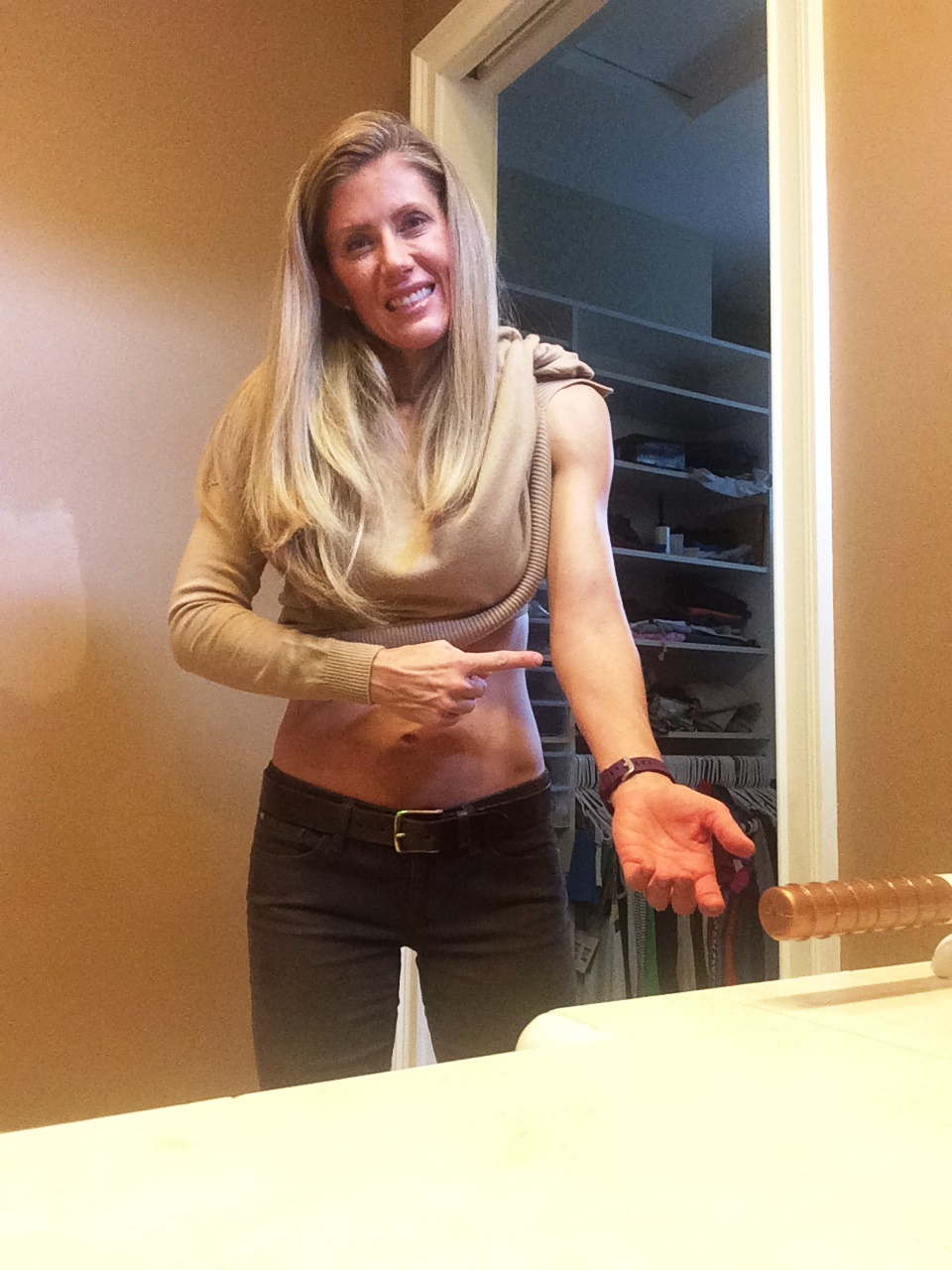 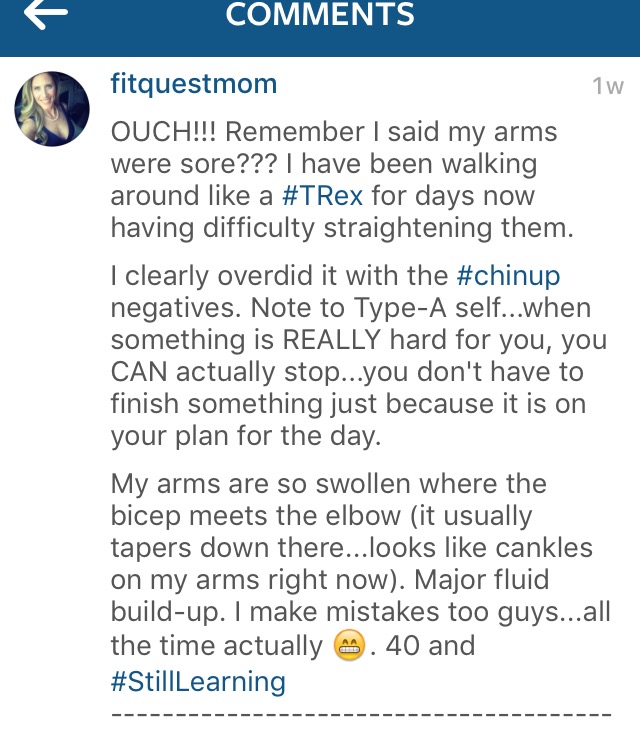 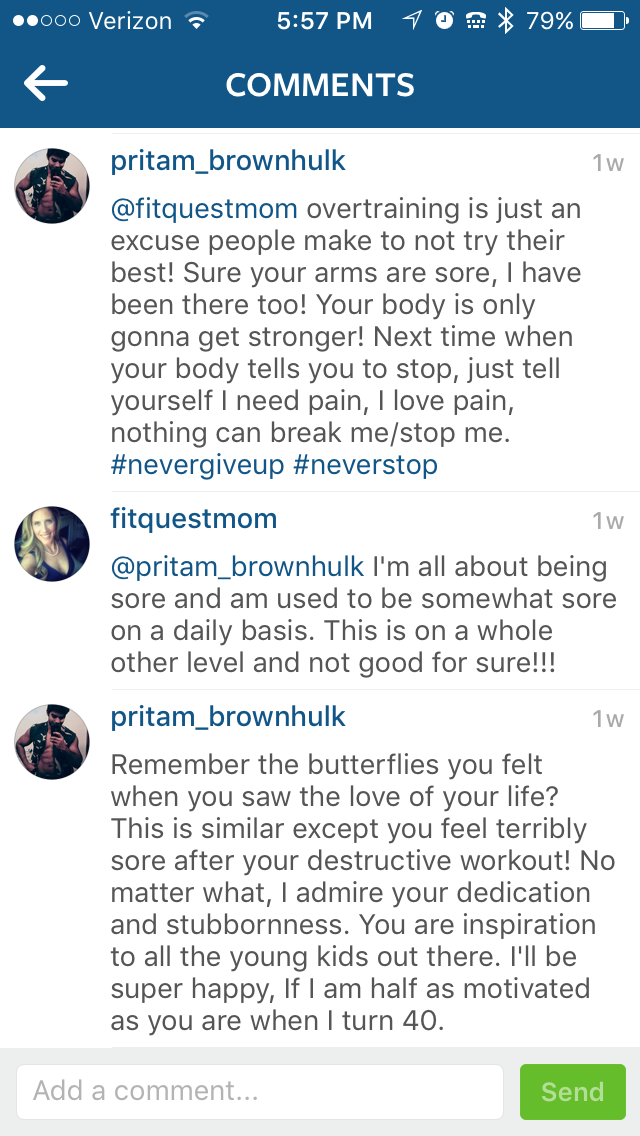 pritnam_brownhulk meant no harm by his comment and was trying to be motivating, but I really want people to learn from my experience and realize that you are always better off playing it safe.  “Better safe than sorry” won’t do harm.

I went about the rest of the day with my family as I normally do.  We went to the mall, ran some errands, and I was just beat.  My daughter kept trying to hold my hand and I had to keep asking her to “Please be careful not to pull on mommy’s arms because they hurt.”

As the day went on I was just exhausted and at our last errand I asked if it would be ok for me to stay in the car which is not normal for me at all.  At this point where my biceps met my forearms they were so swollen I couldn’t even get my hands half way around them.  I also noticed that my brain just wasn’t processing like normal…it was almost as if I was on slow-mo and was a little confused.

When I got home my forearms began to swell more and feel really tight.  I sat down on the couch and was scrolling through Instagram and looking at comments when I noticed that my guardian angel… fit_with_becca left the following comment… and this comment ended-up being THE reason I took myself to the hospital Sunday night after the kids went to bed:

After reading her comment I started researching the condition (Dr. Google) and it was sounding a little too familiar.  I went in to the bathroom and measured my arms in a few different places thinking I just wanted a point of reference.  About an hour later I measured again and my arms had gotten 1/2″ bigger.  Uh…not good.

I turned to my husband and said, “You are probably going to think I am crazy, but when the kids go to bed I am going to go to the ER.  It might be nothing, but this doesn’t feel right and we have 11 people coming to stay with us next week and I can’t be sick…if this is something I need to nip it in the bud.”  He responded, “You know your body better than anyone” and I know he was thinking it would probably be nothing, but he is always really supportive.  I told him to stay home with the kids and started packing a few essentials to bring with me in case I had to stay (meds, phone charger, extra water, apple, protein bars, PJs, etc).

I am going to sail through the ER experience (St. Lukes was awesome), but they drew blood to test my serum CK (creatine kinase).  The doctor didn’t think I had Rhabdo because I didn’t have the tell-tale cola/tea colored urine, but he said he’d test my levels anyway.  When the doctor came back in he looked shocked.  He informed me that a  normal serum CK level is supposed to be less than 100 and mine was over 27,000 and I needed to be admitted to the hospital.  I texted my husband and he wrote back, “I guess you really DO know your body!!!”

When I spoke to the hospital doctor a few hours later we were discussing that fact that I drink a gallon of water a day and I was shocked to hear her say, “That gallon a day habit is THE ONLY reason you showed up here tonight NOT in kidney failure!”  Whaaaaaattttttt????  That was so scary to hear.  My response was, “Am I done working out?  Because if I am, that’s fine…my kids and family mean the world to me and I need to be with them.”  She told me that was not going to be the case at all and that I just needed to recover and get my numbers below 10,000 to make sure my kidneys would be in the clear.  After that I needed to take it easy and get my numbers back to normal, but the other hospital doctor told me he wanted me to start doing cardio 2 days after I got home and weights about a week later.  The told me they wanted me to keep working out because that will keep me healthy.

For those of you new to my blog I need to emphasize that I am really fit.  I could go run a 10K no problem, I lift weights heavy 6 days a week, I have been active since I was 3 years old, etc. (I’m totally NOT trying to be conceited, just stating a fact).  A lot of people think this only happens to newbys who walk into Crossfit and hit it too hard, or people who show up to basic military training and have never been active, or roided-out gym nuts who have something to prove and that just isn’t the case.

While in the hospital I was contacted by a ton of people through Instagram who shared their stories with me…the doctor whose teenage son got it from a pull-up contest at school, the lady whose firefighter nephew was doing a Crossfit workout at his station, and on and on and on.

It took 2-3 days of IVs to get me below the 10,000s.  I think I had 4 saline IVs and then they changed to Lactate Ringers IVs.  Let me tell ya…those IVs felt amazing.  After a day they tried taking me off the IVs to see if my body could bring my numbers down on its own with me drinking a ton of water and it wasn’t successful, so I went back on the IV for another 8-12 hours.  After that we did the off the IV challenge again and my numbers finally got down below 10,000…the magic number that indicated my kidneys were out of the kidney failure danger zone.  I went home from the hospital later that day and have been laying low since then.

I have to admit that this whole experience scared me.  While in the hospital I was wracking my brain trying to figure out how the heck this happened.  It seems like that perfect storm occurred that resulted in my Rhabdo…my colonoscopy and the double prep that must have left me less hydrated than my normal state mixed with the new workout and those chin-up negatives and my overall exhaustion.

My research on the subject of Rhabdo led me to information about how dangerous those eccentric motions can be when your body isn’t used to them.  According to THIS scholarly article (and many others I found), “One of the main causes of rhabdomyolysis is eccentric exercise against high resistance.”  Please, please, please ease into these movements.  I wished I had known about this because I would have started with 4 x 3 chin-up negatives one week and progressed to 4 x 4 the next week, etc.  Had I known the potential danger of eccentric exercises I wouldn’t have pushed it to finish all of the sets.

While in the hospital I made sure to keep my nutrition on point.  Being sick and injured puts a toll on your body and you NEED that food to help you heal.  Despite the fact that I was not training, I kept my calories the SAME and I still lost weight.  I made the best choices I could and St. Luke’s menu made it fairly easy for me.  I did lower my protein macros by 20g per day in order to ease the burden my kidney’s were experiencing and I raised my carbs by 20g to make-up the difference.  I have kept my macros that way for the last week and will be increasing my protein a little tomorrow.

Here are some of my breakfasts from when I was in the hospital (my hubby brought me my favorite smoothie each day):

And some of my lunches and dinners: 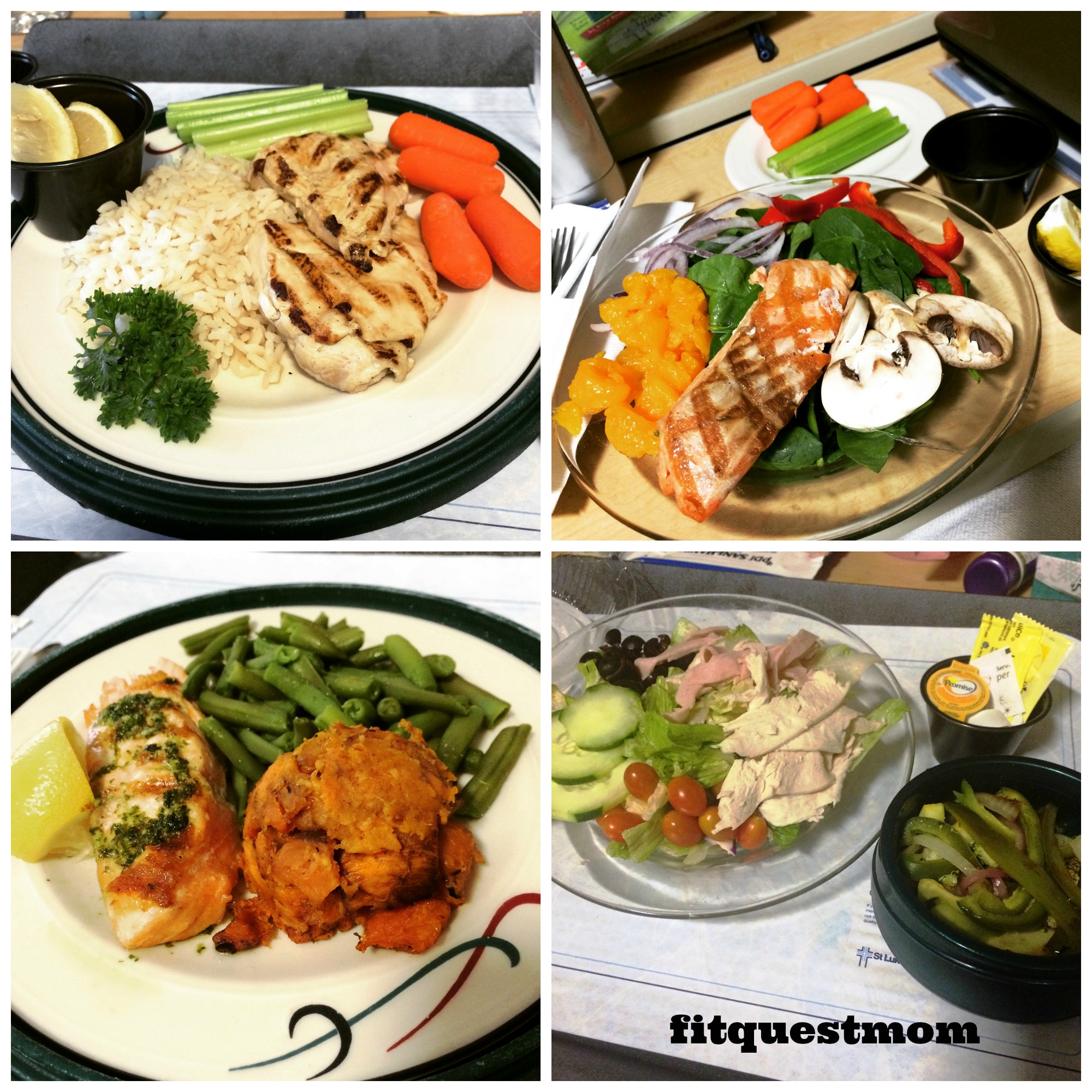 Thank you to everyone for your well wishes and prayers.  I head back to the doctor on Tuesday to see how my numbers are progressing. 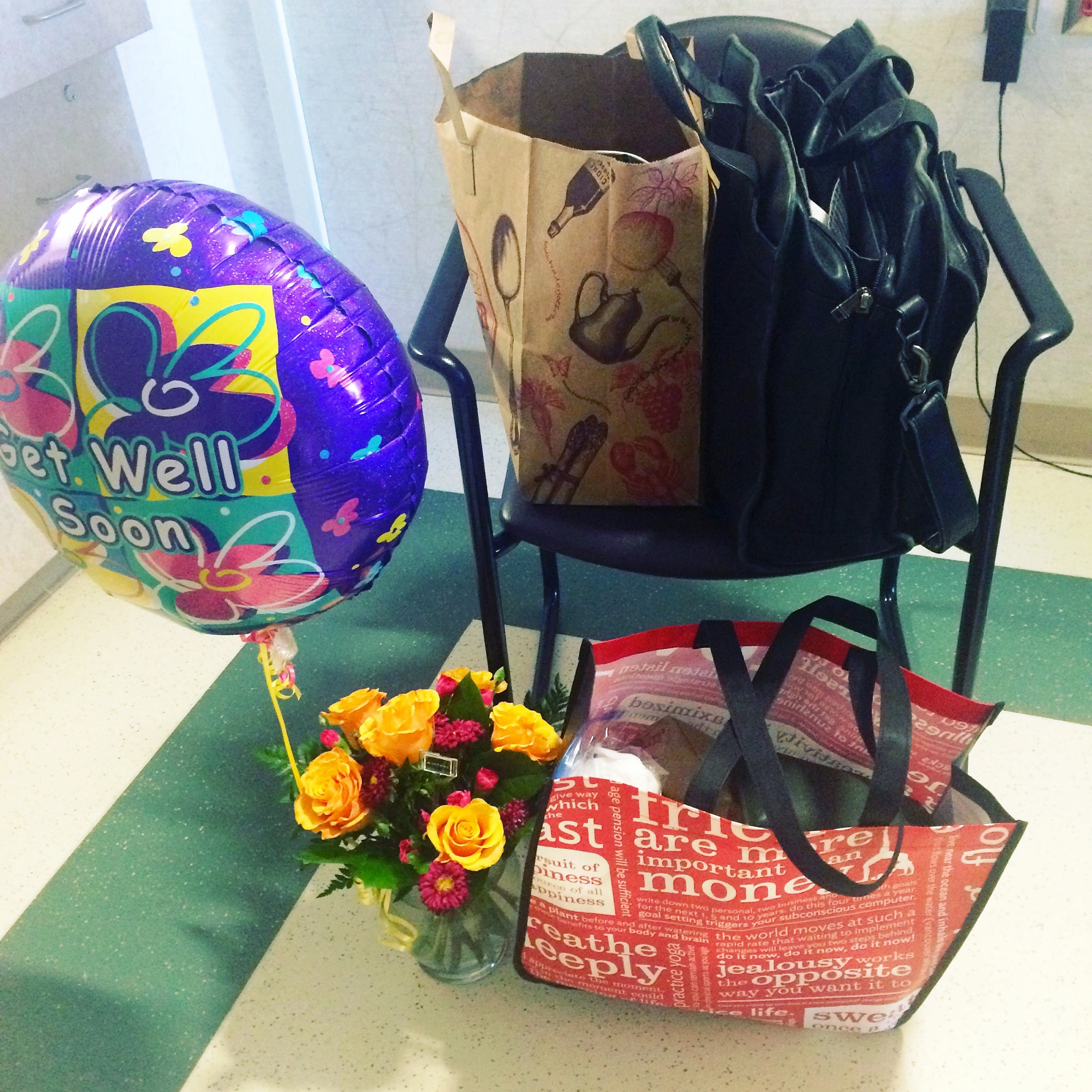 5 responses to “My Brush with Rhabdo”